46 | You know what really funges my tokens?

I think they're rather dumb. Smarter folks than I have written at length1 about how

Harsh segue into me also stating that I harbor little to no misgivings towards artists trying break into the scene, stay relevant, or even make a quick buck in the ever-evolving market – that ire is reserved strictly for the bad actors and people in my mentions tagging me for giveaways. Additionally, I want to give explicitly positive credit to the fellow who inspired this post with his neat idea: 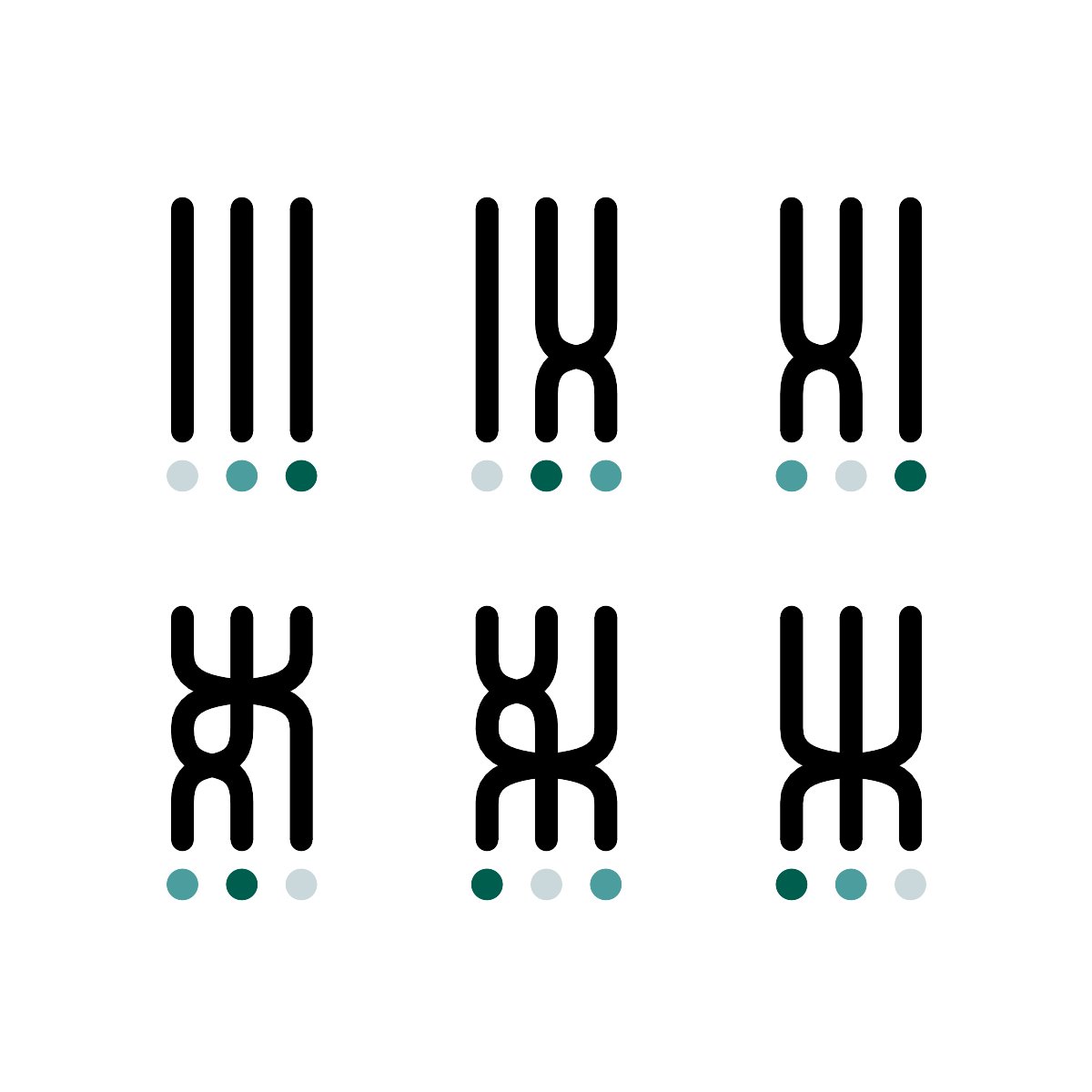 But... as his replies point out, it's not a novel idea5 nor algorithm6. Worth stating –not to detract from the value of artists' labor or anything of the sort– but rather to underscore that minting something like this as a Non-Fungible Token is pretty stupid.4 You can't patent geometry.7 Therefore, I took it upon myself, the Robin Hood of would-be NFTs to reverse engineer this factorial pattern, liberate it, and more...

Let's first examine the problem and devise a game plan about how we can replicate these intertwining patterns.

Next, we need to generate all the permutations of a list: simple as.

Then, observing from both Lars' replies to the inqueries about how this pattern was achieved, the figures themselves, as well as some experience with leetcode medium problems, we'll want to perform a series of swaps which lead us from our initial configuration e.g. [1, 2, 3] to each of the desired permutations.

To draw curves between points, it will probably be useful to keep track of this "state history" of sorts. This also implies that the height of each figure will need be proportionate to the minimum number of swaps needed permute the initial configuration into the target or vice versa. Analysis8 indicates that the worst case for a generic algorithm is a reversed array, or some equivalent –perhaps-odd-in-length– permutation. Such an array is said to be maximally fucked, and requires n−1 swaps to be unfucked which is O(n). So, the height of each permutation is proportionate to the number of elements in the permutation.

To keep the figures uniform in height which is aesthetically desirable, we'll need to pad this state history with duplicate rows. For example, [1, 2, 3] is both the initial configuration and the first permutation, but no-ops don't look pretty when plotted, so we'll draw out the path into repeating segments:

Once we've segmented each trace of a permutation, we need only connect the dots with fancy curves and we'll have successfully created a money printer bounded only by how many combinatorials your computer can handle.9

Daniel Shiffman is my Spirit Animal

True to form, we'll start with blank p5.js project.10 If you don't know about p5.js, look no further than The Coding Train for a heaping amount information on generative art, introductory coding, and much much more using the p5 library! Daniel Shiffman is the Bob Ross of technology.

Next we need a helper function to create the trace or state history of swaps separating our initial configuration from the target permutation:

Then, back inside the draw loop, we want to:

an actual implementation of which can look something like this:

And there we have it, for all permutations of 3, 4, and most of 5 respectively: 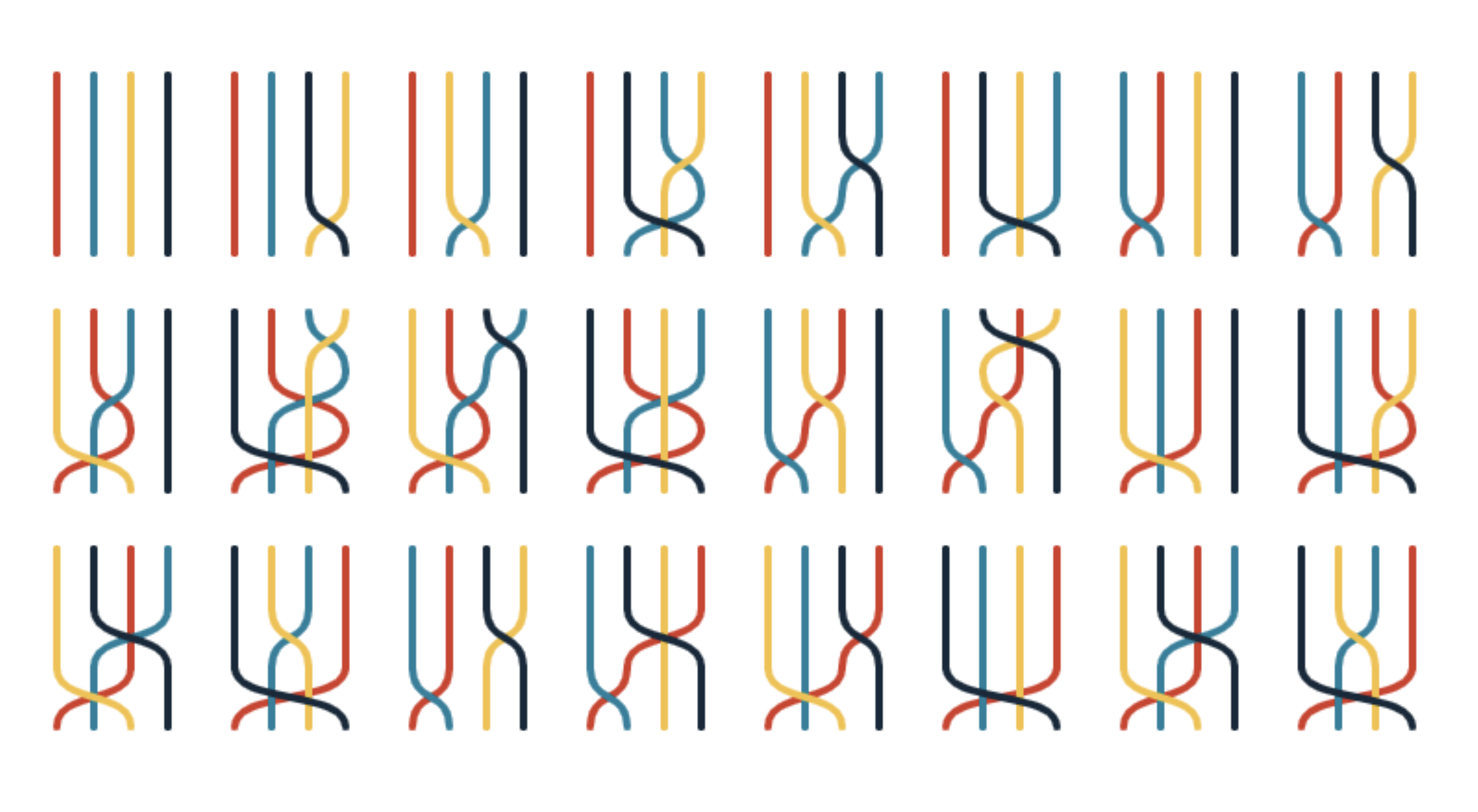 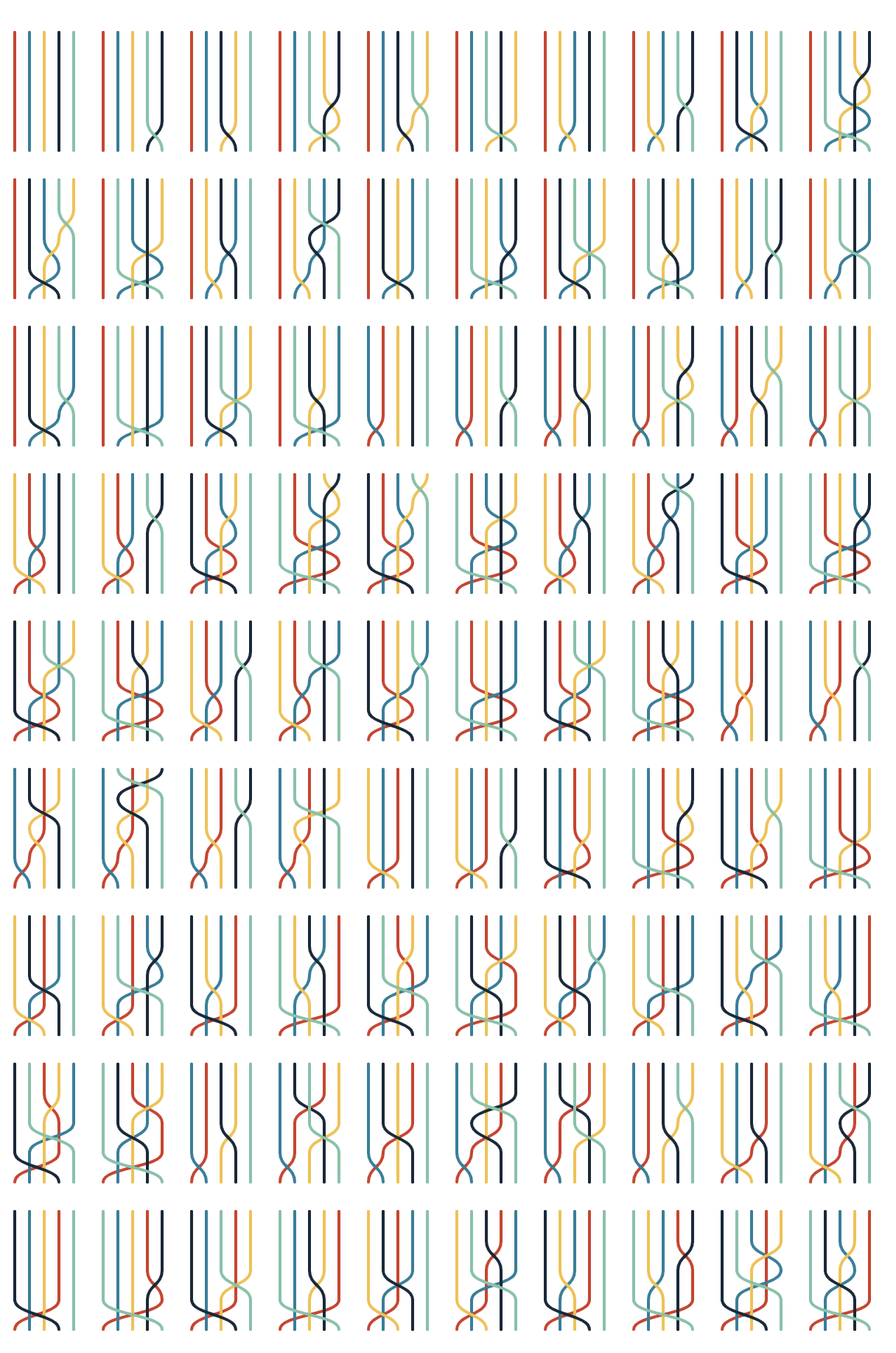 Caveat Emptor – this code is messy, suboptimal, and doesn't even center the figures on the page, but it's perfectly acceptable for me since I'm just going to export it as an SVG and center it on piece of paper to be plotted.

Exporting from p5 to SVGs

By including the following SVG module in your p5 sketch's index.html,

we can add the SVG argument to the createCanvas function to instruct the browser to render elements of the canvas as SVG curves which we can then save at the bottom of our draw loop, or on keypress, or some other triggering event:

which will save the curves to the desired output on page refresh which can then be imported into your favorite plotting software and plotted right away.

If you like these, I'd be happy to funge you one. Email or message me a mailing address and I'll send one to you at the cost of shipping (~$11) – I will not accept crypto. 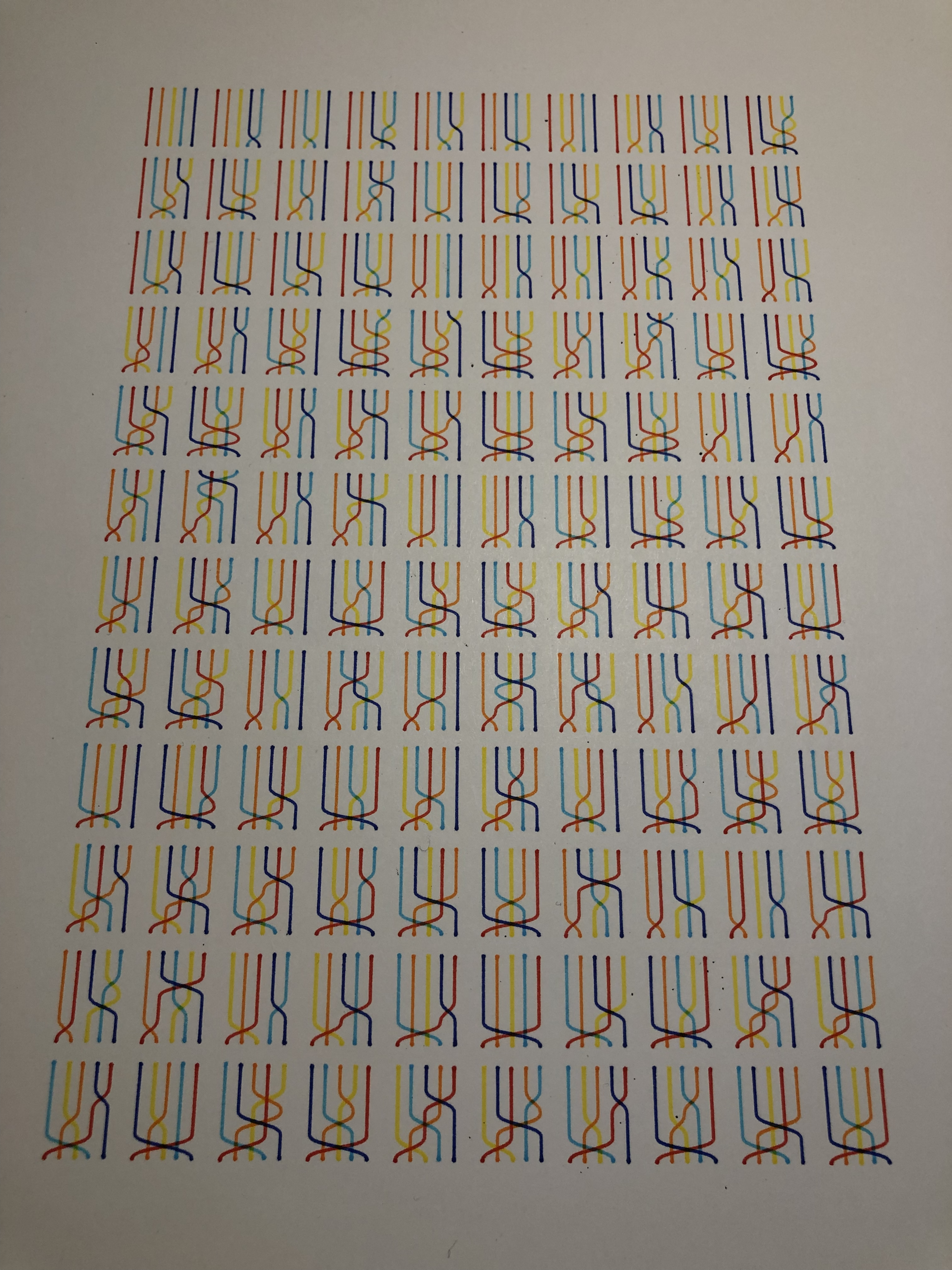 Alternatively, make your own! Here's the complete source code.