This post walks through an implementation of a mark and sweep garbage collector using python. This post is mainly for my own edification, but when I encountered the problem in one of my classes, I found it a challenging and satisfying graph problem.

For this project, I'm just going to use Python.

Also given are r roots and m pointers, or references stored in objects that refer to other objects.

Write a program that performs a mark-and-sweep collection and outputs the total size of the live heap as well as the total amount of memory which the collector would sweep if the heap were garbage collected.

Report the retained heap size (the additional number of bytes that could be freed if this root were removed from the graph and the collection were repeated) for each of the roots.

The first line of the input contains 3 non-negative integers n,m,r such that r≤n. The second line contains n positive integers si​ that denote the size si​ of object i.

Following that are m lines with tuples (i,j) where 0≤i,j≤n, each of which denotes a pair of object indices. A tuple (i.j) means that object i stores a reference to object j, keeping it "alive" privded that si​ is reachable from a root.

The decription of the references is followed by a single line with r integers denoting the roots of the reachability graph R0​,R1​,...,Rr−1​ which do not have incoming edges that point to them.

Output R+1 lines, the first of which should output two numbers l,s where l represents the total size of the live heap, and s the amount of garbage the would be swept if the heap were collected. Following that, for each root, output how much additional memory could be freed if this root were removed, in the order in which the roots appear in the input. 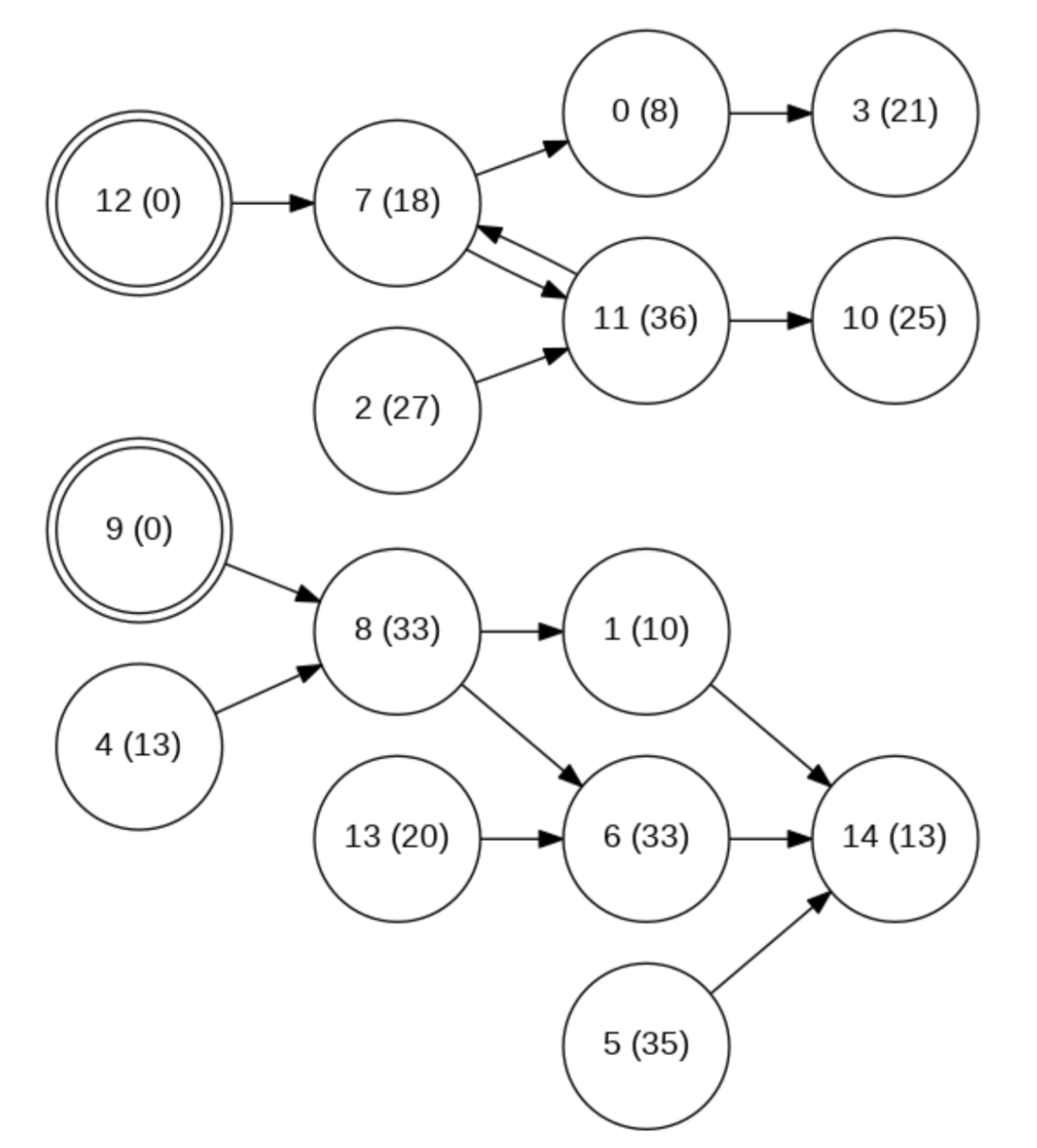 The program should produce the following output

The strategy we're going to employ uses a Breadth First Seach beginning at each of the roots, marking nodes as reachable from the root, then perform one sweep to determine how many bytes would be collected (objects not referenced by any nodes referenced by a root), and then a secondary sweep to determine how many additional bytes would be collected by removing the roots.

The first step is to parse the input and build our graph.

We'll represent out graph as a perverse adjacency matrix: a list of dictionaries representing objects on the heap with fields for the object's size, the other objects it references, and whether or not is has been marked by our BFS:

Next, we'll need to implement a simple BFS algorithm which marks nodes that have been visible:

Next we ma out the reachability graph from each of the roots:

Now, we perform the first sweep to see count and ouput how many bytes would be collected:

Right after that, we can perform the second sweep to account for how many bytes would be reclaimed if each root were removed.

though the graph representation is a bit ugly, it's easier to comprehend as satisfactorily achieves the desired output!