This article contains my summary of Daniel's summary of Microsoft Research's publication 2018 "TrueSkill 2: An improved Bayesian skill rating system", an improvement on the original TrueSkill system developed for match making in Halo (3?, never played too much Halo 😬).

This paper was pretty straightforward, so this article will just cover the key points made in each section, focusing on the applications of Bayesian Networks and Markov Chains for Monte Carlo Methods.

The paper aims to develop an accurate and computationally efficient skill rating to estimate the ability of a player to win the next match. In order to meet the requirements, set in place by the researchers for developers, the probabilistic generative models must make assumptions about how match results are related to player skill and vice versa. Furthermore, there are meta-requirements to make this rating accurate with minimal data as the alternative of playing dozens of matches before noticing improved math making would suck, and no one would play the game. Bayesian inference is good at approximation with few data.

"A system or model is only as good as its underlying assumptions." 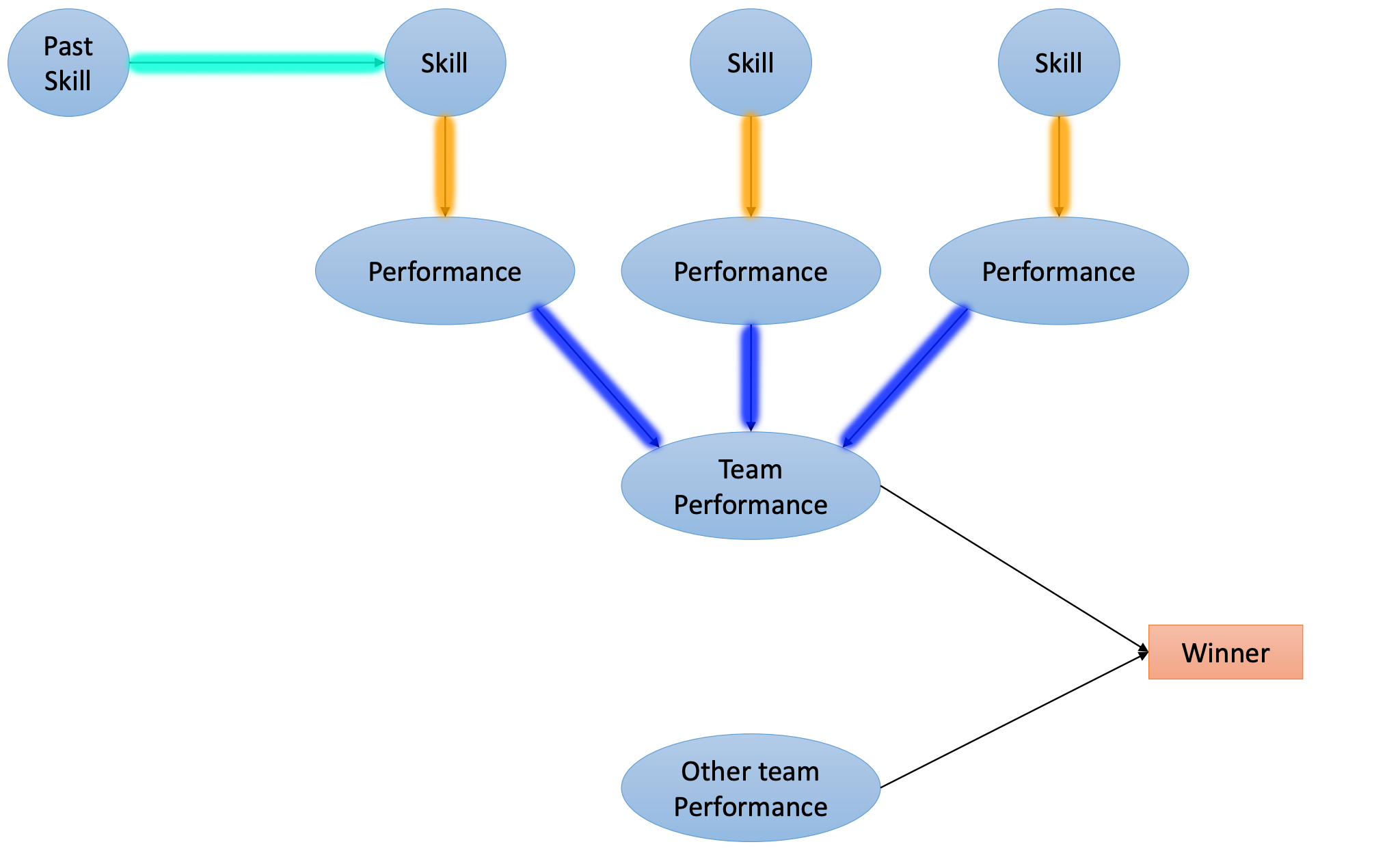 Base skill is defined by:

After each match, the player's latent skill changes by a random amount given by a variance parameter γ:

Degradation of skill over time spent not playing is given by a parameter τ:

And after each game, performance (sample of skill) changes by some amount related to the randomness of the game β:

Simulated outcomes are intuitively defined as:

with overall team performance deterministically given as:

Each of the parameters above are tunable, so the only assumption is that m0​,v0​ are given which should be available from a record of all or some prior games. Furthermore, using the Rule of 5, you could at least get the median (not to be naively confused with the mean). TODO get rule of 5 in here

If we know that skill and perf are normally distributed, it would make sense to assume that the model already suggests win/loss rate, but this is often not the case. Usually, these compositions of distributions are intractable, meaning they are not sampleable. Markov Chain Monte Carlo Methods le us work around this, with any such combination of distributions. If we follow the sample chain down to perfi​, we can roughly plot the resultant would-be sample of our intractable "winner" distribution. This plot would be numerically correct or accurate, but not analytically correct.

Formally, the model defines a joint distribution over player skills and match results, conditional on the unmodeled aspects of each match (which we will abbreviate as conditions):

In practice, we don’t compute the entire joint distribution over skills, but only the marginal distribution of skillsit​. This distribution is approximated by a Gaussian, and the mean of that Gaussian is taken as the player’s skill rating.

​Initialize skillsi​∀i∈players, with mean, variance m0​,v0​For each match result in order of start time: For each player in the matchLook up the current skilli​Increase the variance according to the time elapsed since the player’s last match τInfer match result and skill distributions to get a new set of skill distributions to represent skilli​for the current matchIncrease the variance according to γ to represent change in skill from playing the matchStore the new skilli​​​

TrueSkill 2 used online updates which were fast, real-time approximations of the resultant distribution over skills. The paper also discussed the increased accuracy of skill ratings from batch processing which was drastically slower, but less noisy. However, after a few sample games, the online ratings roughly converged to the batch-inferred ratings (this is how match making is able to provide relatively decent matchups in games like CS, or Rocket League after 10 qualifying matches )

We can tune the aforementioned parameters until our model resembles historical data. They could be trained in a variety of ways, including evolutionary, or genetic methods. Using RProp which, among other things, only uses the signs of the gradients to compute updates.

Speculation: TrueSkill 2 uses RProp for its low computational cost and is potentially better suited for rocky training landscapes. Additionally, the standard backpropagation might not have tracked match outcomes as well as RProp.

"You find a way to measure the outcome you want, you offer to give someone access to levers by which they can plausibly influence this outcome, and you contract to pay them more cash the higher is this measure." - Rob Hanson

This section of the paper described how the research team achieved increased predictive accuracy by incentivizing or identifying individual metrics which contributed to skill.

Noting that when players queue together, they tend to have a higher perfteam​, the model adds an offset to the skilli​ depending on the size of the squad s.t.:

In order to bias the change in skill with experience towards improvement, the team introduce a variable experiencett​ to be the number of matches played in the current game mode before time t, capped at 200 for computationally efficient.

Additionally, other statistics that might have deserved their own modifications as above seemed to be strongly correlated with tracked parameters. For example, a lapse in time played τ was strongly correlated to kill rate and death rate, as was score.

By adding additional tunable parameters wpc​,woc​,vc, for each count type c∈kill, death for each game mode. the model was able to determine how individual statistics depend on performance, the skill of teammates, and opponents:

This model worked for any team size are is unique to previous work on sports scores in 3 ways:

By delineating between baseSkill and \text{skill} in a specific game mode, the model was also tunable per different modes s.t. the #1 free for all player doesn't get matched against the #1 player of a different game mode that he might suck at.

Adding in the additional assumptions defined for TrueSkill 2, the model now resembles: 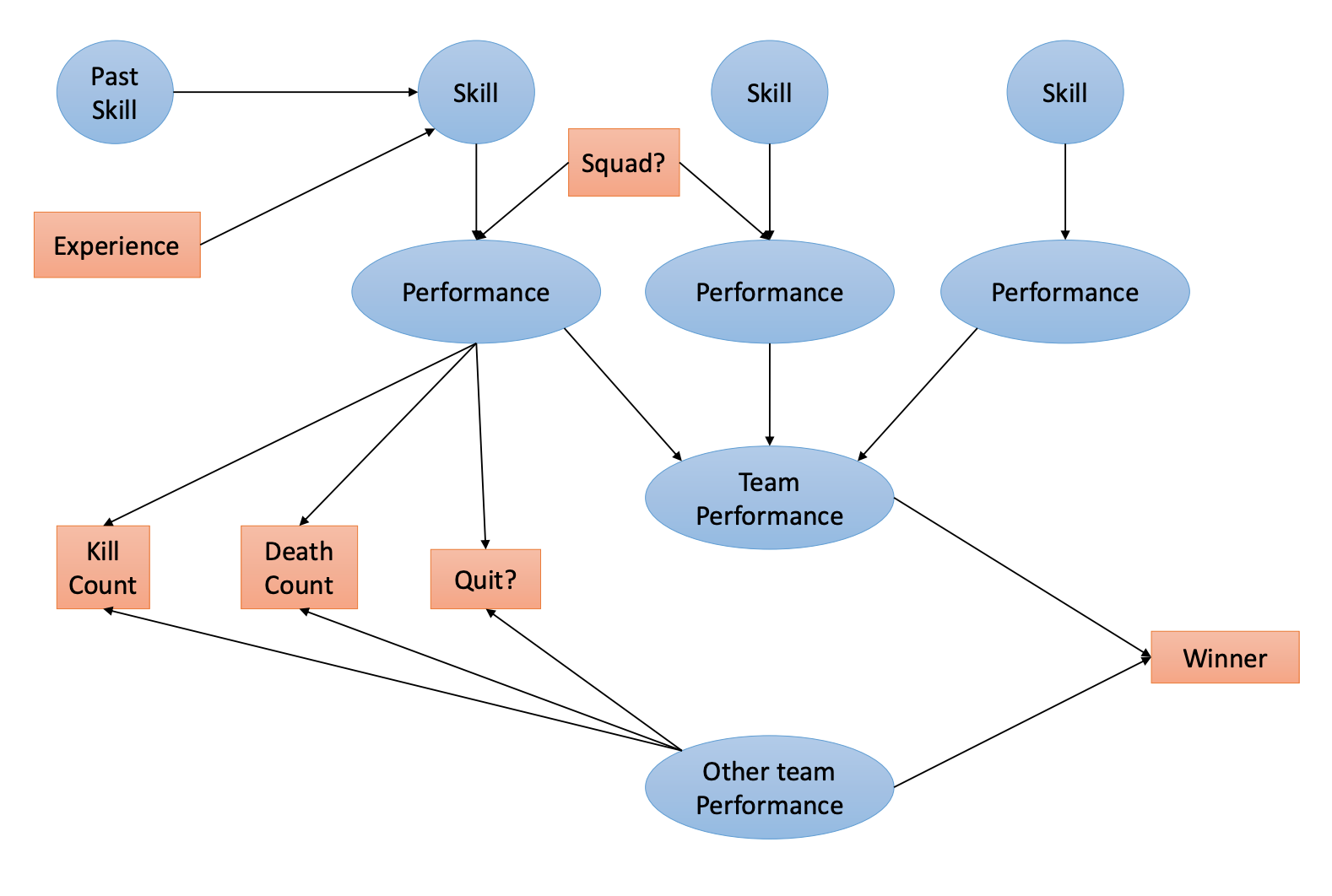 Bayesian Methods for Hackers (the missing modeling manual for PyMC3

How to Measure Anything