This is a collection notes on Category Theory for personal reference.

1 | Category: The Essence of Composition

1.3 Composition is the Essence of Programming

2.2 Types Are About Composability

It might return True, False, or bottom. It's convenient to treat every runtime error as a bottom:

which is acceptable to the type checker since undefined evaluates to bottom which is a member of any type including Bool.

Because of this definition, the category of Haskell types and functions used above are called Hask, rather than Set. There's a theoretical distinction, but pragmatically speaking, they're equivalent

2.4 Why Do We Need a Mathematical Model?

This is something of a cheap shot since we could just as easily ask for a mathematical model of reading characters from stdin, or sending a packet across the wire, or any other program which doesn't intuitively lend itself to notation like that of computing the factorial of a number. GG Haskell.

The solution: Category Theory. Eugenio Moggi found that computational effect can be mapped to Monads which helps ? 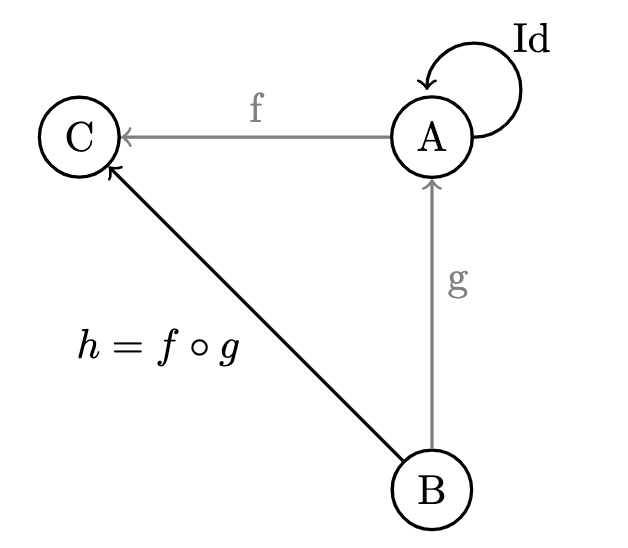 is known as a Partial Order

First, what does the m -> m -> m argument list mean? It can be interpreted as:

We can instantiate a string as an instance of Monoid and define its behavior:

The formula for composition, then, is:

Then, we can compose them:

Here, uniqueness is critical, because there are other sets (all of them, actually, except for the Empty category) that have incoming morphisms from every set.

But this isn't the/a terminal object, because there's at least one more:

Reversing the identity morphisms is a no op: ↺,↻ 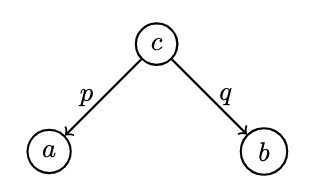 For example, we can define two Haskell types as our constituents, Int, Bool:

Which, as it stands, is pretty lam, but matches our criteria. Consider a denser, but also satisfactory pair of constituent types:

Whereas the first set of projections was too small, only covering the Int dimension of the product, these candidates are too broad, with the unnecessary duplicate Int dimension.

Returning to the universal ranking, how do we compare two instances of our pattern? That is, how do we evaluate 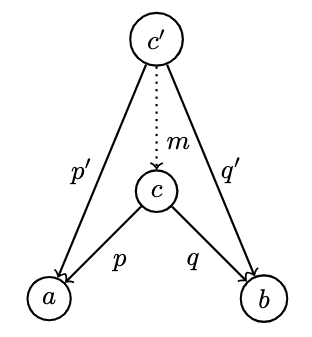 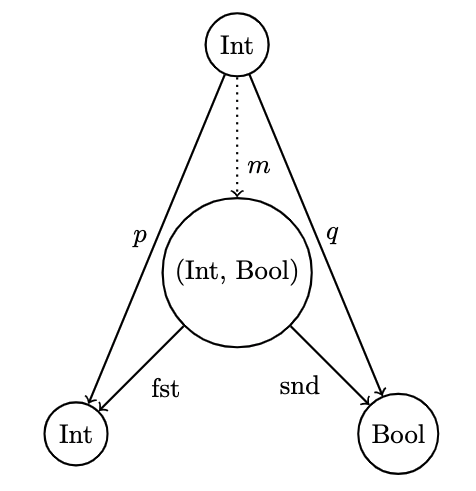 And in our second, more complex example, m has a similar uniquely determined m:

Therefore, (Int, Bool) is better than either of the other two candidates. Why isn't the opposite true? That is, can we find some m′ that would help reconstruct fst, snd from p,q?

Thus, given any type c with two projections p,q, there is a unique m from c to the Cartesian product (a,b) that factorizes them:

which makes the Cartesian product (a,b) our best match, which implies that this universal construction works in the category of Sets.

Now, let's generalize that same universal construction to define the product of two objects in any category. 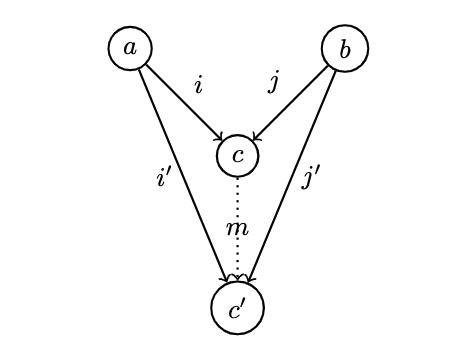 In programming terms, it's represented as a union with the added field of a tag enum:

Consider using this set, represented by the unit (), as yet another, vastly inferior candidate for the product pattern, equipped with two projections p,q from the singleton to each constituent set. Because the product is universal, there is also a unique morphism m from our unit candidate to the product.

Recall that m select an element from the product set and factorizes the two projections:

When acting on the singleton value, the only element is (), so these become:

Conversely, there is not an intuitive interpretation of how this behaves for the coproduct, since the unit () tells us nothing about the source of the injections.

This is a property of functions, not sets. Functions in general aree asymmetric.

The creation of a product type can be interpreted as a binary operation on types. Thus, the alpha isomorphism looks very similar to the associativity law for monoids:

Except that in the monoid case, these two compositions were equal, whereas here they're only equal up to isomorphism

Example: We want to design a representation for a chemical element, and be able to verify that a chemical's symbol corresponds to the prefix of its name:

But this is bad, error prone, and reliant on contextual clues. A better model might resemble:

These two representations are isomorphic as evidenced by some conversion functions:

If we do some algebraic substitutions using the table above and replace List a with x, and we get:

But, because we're working with a semiring, we can't solve this equation with division or subtraction. Instead, we'll keep replacing x with 1+a∗x:

An infinite sum of product tuples which can be: 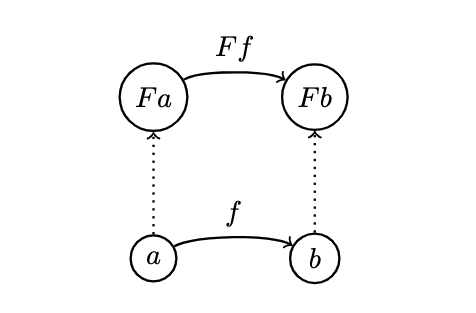 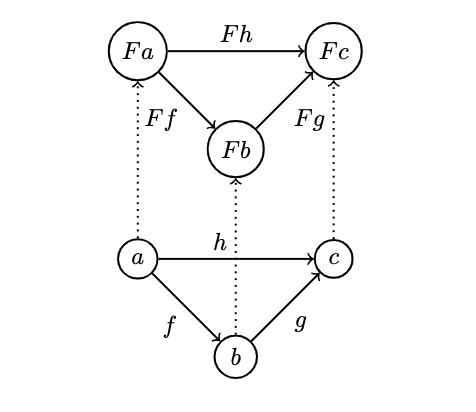 Here, Maybe is not a type, but a type constructor. It needs a type argument to be a type, otherwise it's just a function on types

For example, for any function from a to b:

we want to produce a function 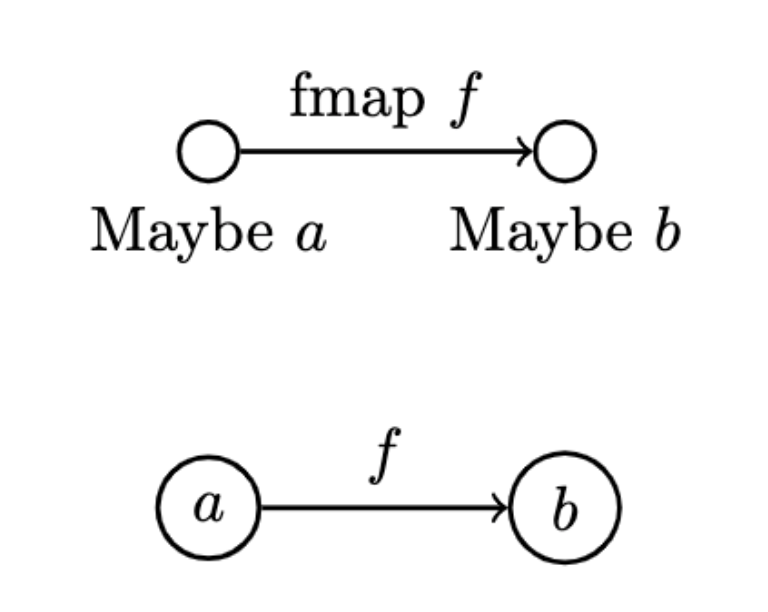 For example, the class of objects which support equality:

Here, f is a functor, and if there exists an fmap w that type signature, then the Haskell compiled can deduce that f is a type constructor, not a type

which also has two cases:

Thus, we can blur the lines and move freely between code <--> data

To illustrate that, let's define a type which completely ignores its argument

Observe that the Constant functor is a special case of ΔC​: the endofunctor case of the black hole

For example, if we want to swuare the elements of a Maybe List:

The compiler will recognize that he first, outer fmap pertains to the Maybe component, and the inner fmap to the List, which is also equivalent to 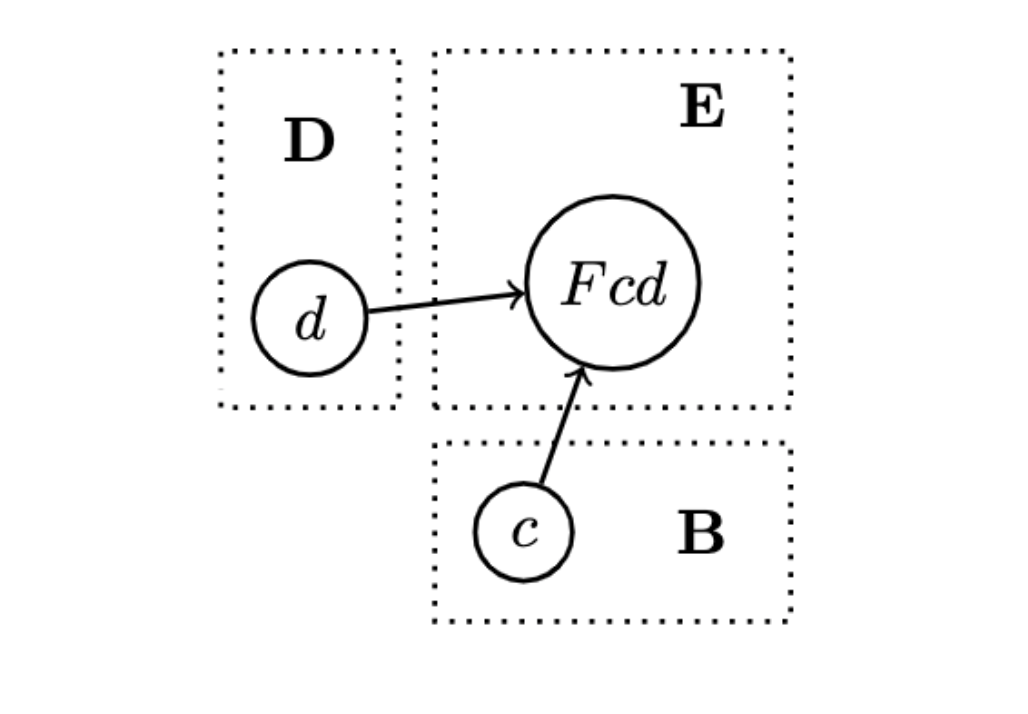 which is associative, has an identity id=(id,id) and thus is a category 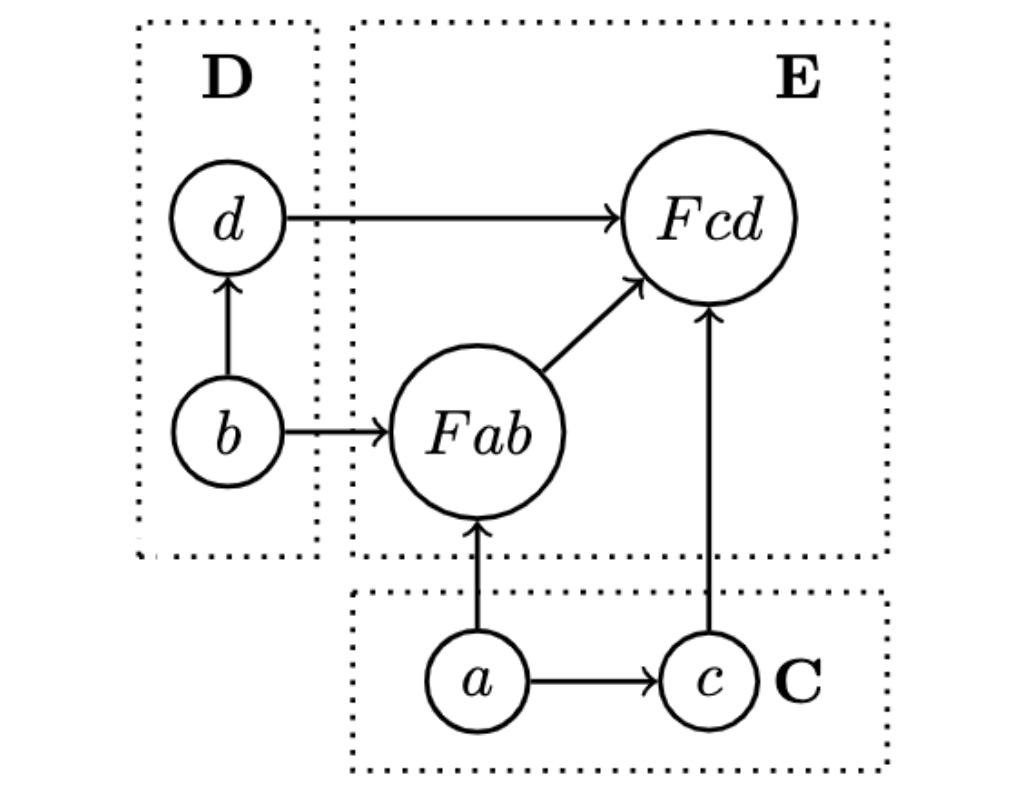 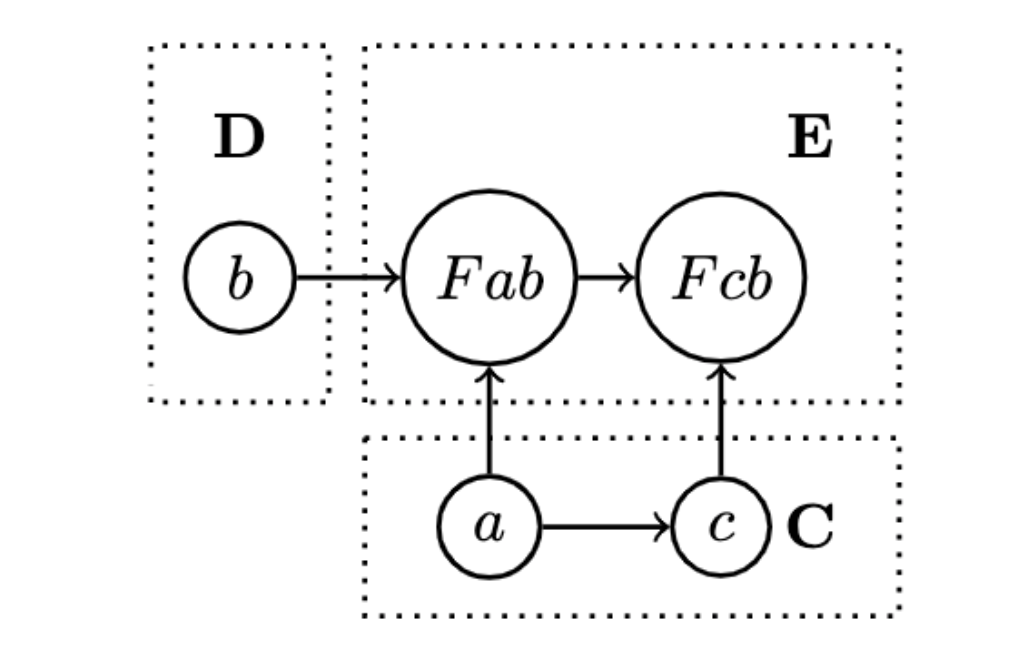 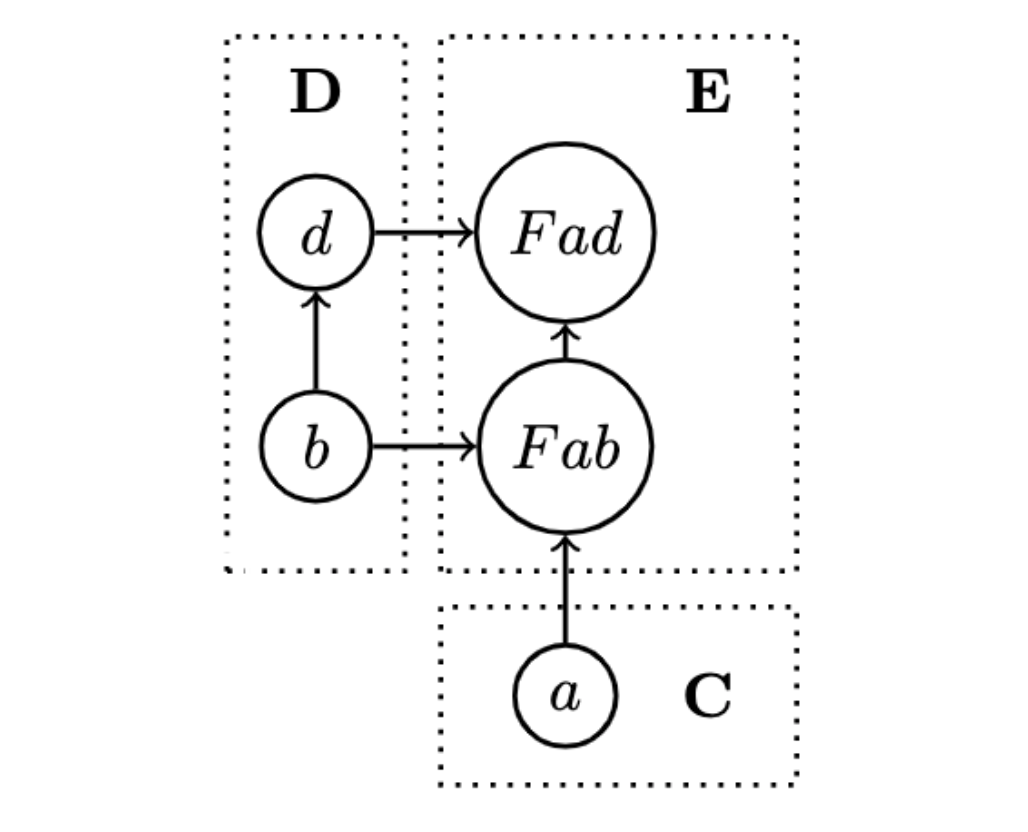 which is preetty straightforward, bimap applies first to x and second to y

and the action of the bifunctor here is to make pairs of types:

and, by duality, a coproduct if its defined for every pair in the category, is also a bifunctor.

We can no redefine Maybe in terms of these ADTs:

Thus, Maybeis the composition of the bifunctor Either with two functors: Const () and Identity

As long as the type constructor (in this case Writer) supports the fish operator (composition) and return (identity), this constructor can define fmap for anything, thus Embellishment in the Kleisli category is always a functor (but not vice versa)

Consider a functor that goes between Cop and D

which maps a morphism fop::a→b in Cop to the morphisms Ff::Fa→Fb in D. But fop secretly corresponds to some morphism f::b→a in the original category C

a functor with a twist. 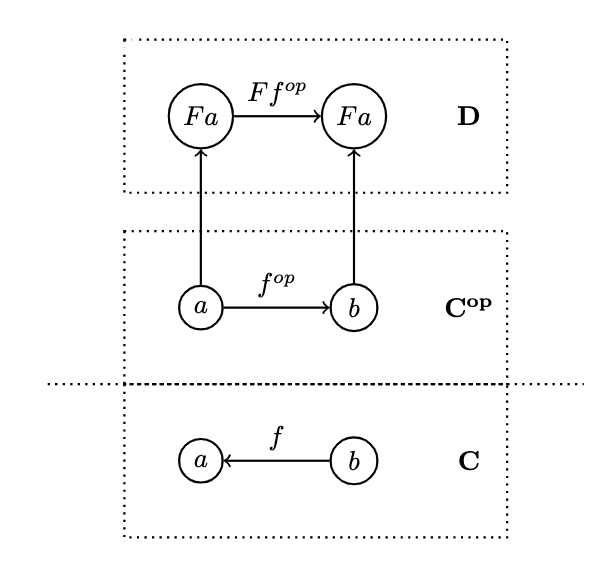 As a Haskell typeclass, the contravariant functor (endofunctor) is 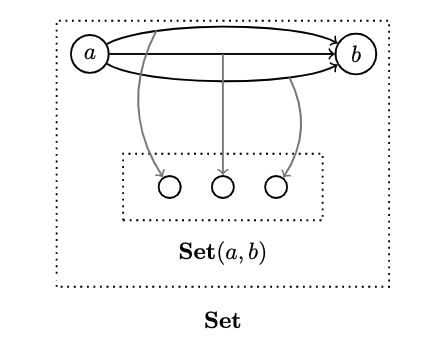 Function types are different from other types:

But the same is not true of other categories where hom-sets are external to a category, they're called external hom-sets 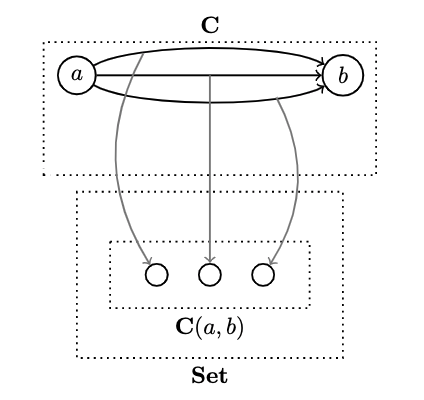 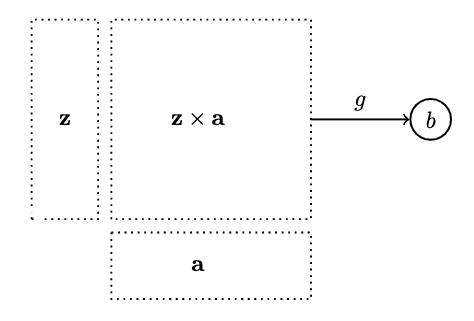 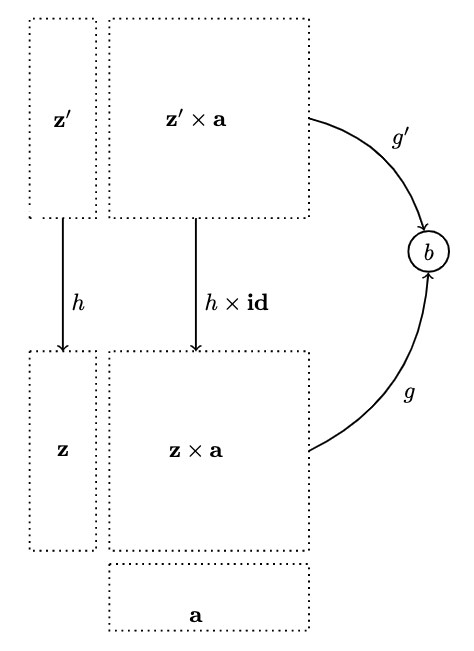 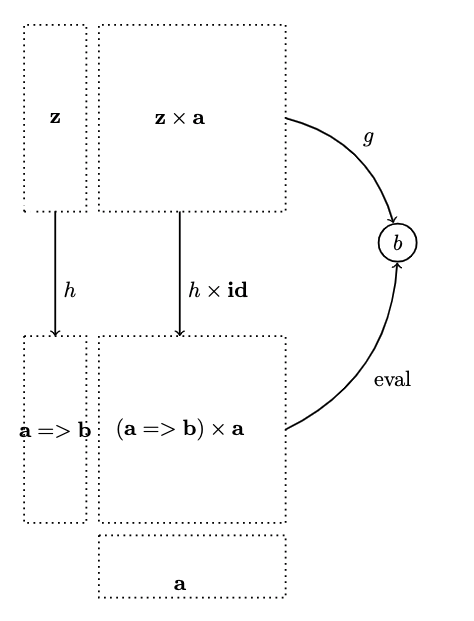 such that, for any other object z with a morphism

there is a unique morphism

that facotrs g through eval

For example, C++'s char contains 256 possible values. Predicates like isUpper and isLower are implemented with lookup tables, equivalent to tuples of 256 boolean values. A tuple is a product, so the product of 256 bools is bool×bool×...

is called a bicartesian closed category

All the baseic identities of arithmeetic exponentials hold for these:

Corresponds to Haskell's () -> a, the isomorphism between elements of set a, and the functions they that pick those elements

Expresses currying purely in terms of exponential objects: a function returning a function is equivalent to a function from a product (a two argument function)

A function returning a pair is equivalent to a pair of functions, each producing one element of the pair

Curry-Howard Isomorphism states that every type can be interpreted as a morphism: T/F

Which is modus ponens: if it's true that b follows from a, and a is true, then b must be true

I'm transcribing these chapters with a broken finger, so just infer any typos 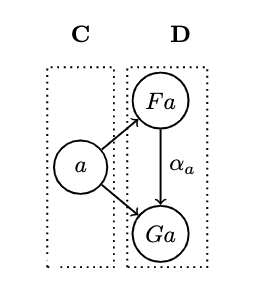 Keep in mind that a is an object in C, and αa​ is a morphism in D. If, for some a, there is no morphism Fa→Ga in D, then there can be no natural transformation between F,G

and the natural transformation α provides tow additional morphisms that complete the diagram: 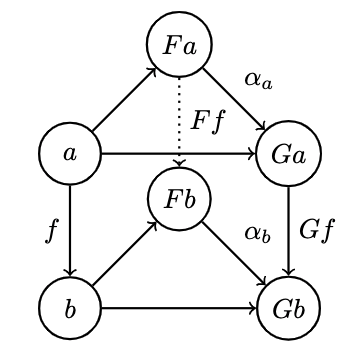 Now we have two ways of getting from Fa→Ga. To ensure that they are equal, we impose that the naturality condition holds for any f:

which is rather stringent: if morphisms Ff is invertible, then naturality determines αb​ in terms of αa​: it transports αa​ along f: 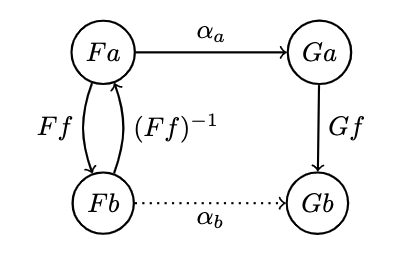 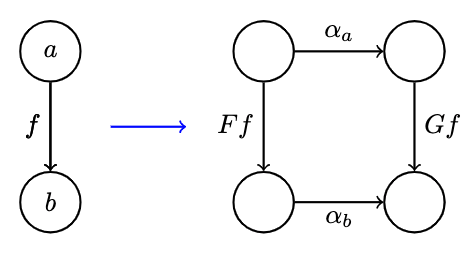 where F, G are functors automatically satisfies the naturality condition:

For example: A natural transformation between the List functor and Maybe functor, returning the head of the list if it's non-empty:

this function is polymorphic in a for all a! Therefore it is also a natural tranformation between the two functors.

We can verify as well:

For every type e, we can define a family of natural transformations from Reader e to any other functor f:

For example, the familiar contravariant functor:

But since the two functors are not covariant, this is not a natural transformation in Hask, but since they're both contravariant, they satisfy the "opposite" naturality condition

What about type constructors that are not functor, like a -> a?

For example, take the natural transformation α from F to G whose component at a is some morphism

These morphisms are composable as follows: 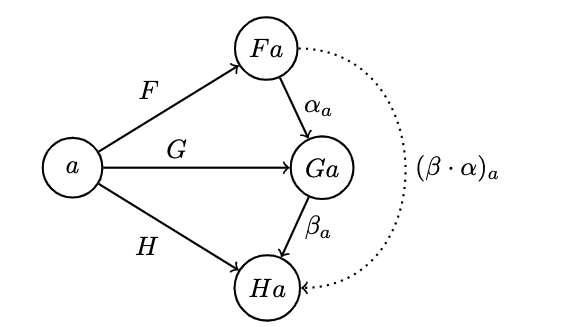 Which expresses that the resultant composition is a natural transformation from F→H: 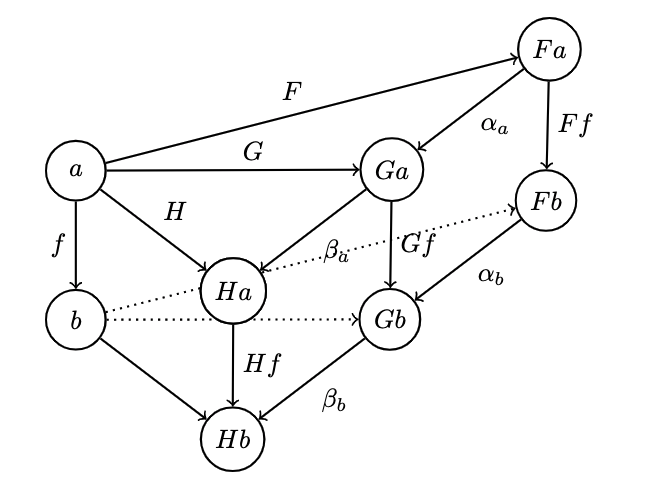 The diagrams above utilize the former whereas the following diagram uses the latter: 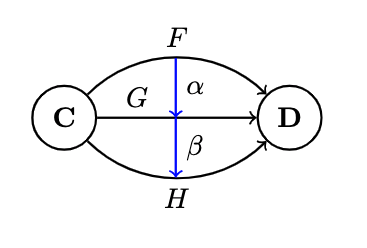 The functor category between categories C,D is written Fun(C,D), or [C,D], or DC where the last expression indicates that a functor category itself might be considered a function object (an exponential) in some other category since an object in a product category C×D consists of a pair of object c,d∈C,D, a morphism between two such pairs (c,d)→(c′,d′) is a pair of morphisms (f,g) where

which compose component wise – and we know that there's always an identity pair.

Thereform, Cat is a cartesian closed category in which there exists an exponential object (a category!) DC for any pair of categories which is just the functo category between C,D

Cat as a 2-category:

Instead of a hom-set between two categories C,D, we have a hom-category DC. We have a regular functor composition: functor F from DC composed with functor G from ED to yield G∘F from EC

and suppose we have two natural transformations α,β acting on F,G respectively 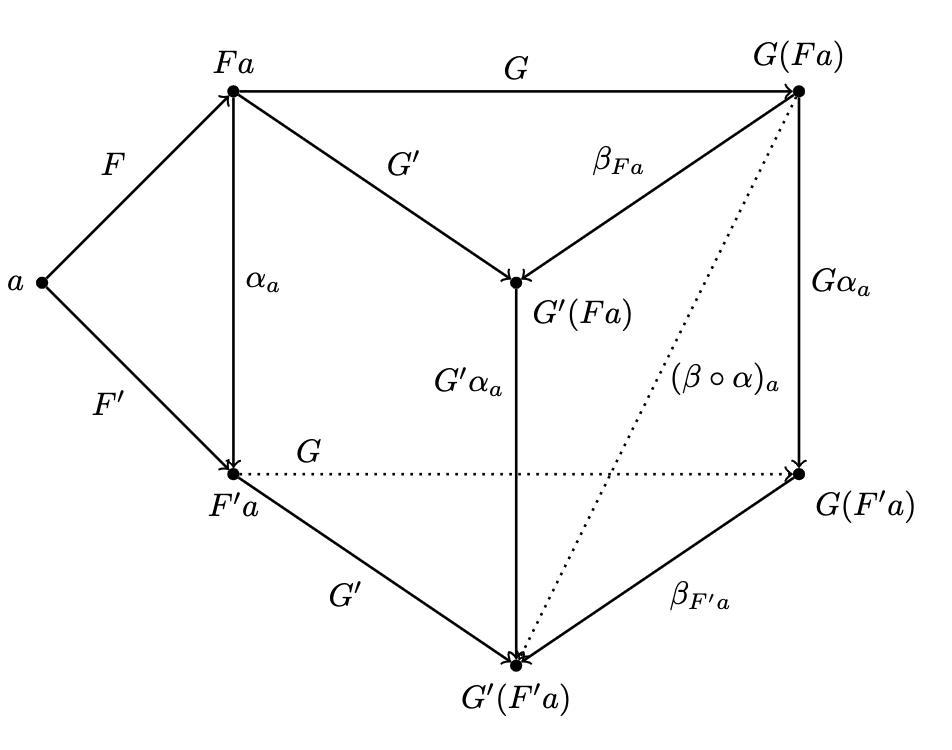 Let's break that one down:

and the other two being symmetric images of αa​ under the two functors:

and there are two such paths we can take from G(Fa)→G′(F′a): 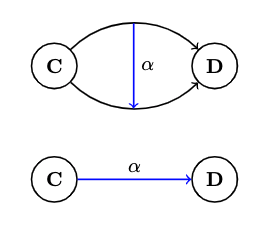 Composition may be defined declaratively:

which is more sequentially-coded. I.e., g cannot happen beforee the eexecution of f completes (at least, that's the interpretation in a lazy, call-by-need language) - but the compiler might do some clever inlining/wizardy to blur the lines between the two methodologies

In physics there's a duality of expressing laws

Light rays propagate along paths ftat minimize flight time (in the absence of reflecting or refracting objects, this is a straight line). The path of minimal time makes the ray refract at the boundary of meterials with different densities, yielding Snell's law

where v1​,v2​ are the velocities of light in the different materials, and θ1​,θ2​ are the angles from the normal to the boundary.